Grace's Guide is the leading source of historical information on industry and manufacturing in Britain. This web publication contains 149,685 pages of information and 235,430 images on early companies, their products and the people who designed and built them. 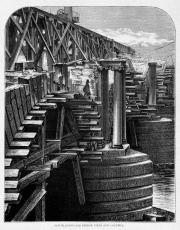 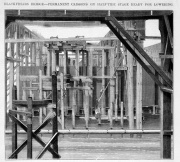 Blackfriars Bridge is a road and foot traffic bridge over the River Thames in London, between Waterloo Bridge and Blackfriars Railway Bridge, carrying the A201 road. The north end is near the Inns of Court and Temple Church, along with Blackfriars station. [1]

7th June 1760. First pile driven in for the foundation.

In the following century, it became clear that the foundations were not substantial enough and a new bridge was proposed.

The design by Joseph Cubitt was finally chosen.

1864. The contract for the new bridge was let to Thorn and Co.

December 1864. Enough of the old bridge was demolished to allow an investigation for the south abutment dam.

For a detailed description of the new bridge see The Engineer 1876/01/07 and succeeding issues.

In 1865 the old Blackfriars Bridge across the Thames, a fine Portland stone structure began in 1760 and completed ten years later, was being demolished and a new bridge, the ornamented wrought iron, cast iron, granite, Portland stone "Venetian Gothic" structure, designed by Mr Joseph Cubitt, which we have with us today, was being erected. There was apparently no sentiment shown over the destruction of the relic of the past, such as is being exhibited today in connection with the suggested demolition of the Waterloo bridge. On the contrary, it was stated in an article in The Engineer issue of February 24th, 1865, that there was nothing to regret in the fact that the old bridge was being removed. The foundations for the piers, it seems, had been formed with few precautions to provide a suitable bed for them. For seventy-five years however, they gave no trouble. So long as old London Bridge existed its closely spaced "starlings " dammed up the water to such an extent that the scour of the river at, Blackfriars three-quarters of a mile higher up, was rendered innocuous.

About 1831 old London Bridge was removed, and the foundations of Blackfriars Bridge began to give trouble by subsiding one of the arches cracked diagonally through the crown and haunches, and for several years the bridge was in use with the defective arch supported on heavy timber trusses. In its day the old bridge was deemed a magnificent structure, but at the time of it's demolition it was described as presenting few points worthy of imitation. Its Portland stone was of the very finest quality, having been taken from veins long since exhausted. But the workmanship generally was poor, the jointing of the voussoirs especially being defective. The haunches were disproportionately heavy, and it was questioned in and article whether the architect who designed it knew anything whatever of the mathematical principles involved in the construction of a stable arch.

The bridge cost £151,000, an exceedingly moderate sum even allowing for the higher value of money in the eighteenth century. Its removal presented considerable difficulty. In fact, we doubted whether as much skill prescience or inventive power would be required for the erection of the new bridge as was being displayed in the removal of the old. Of the new, the existing Blackfriars Bridge, the entire design was handsome enough and that it was probable that the bridge might rank on terms of equality with any other on the Thames. That judgment would hardly be repeated today, for in Rennie's threatened structure higher up many of those seeking to save it see the finest example of a bridge of its kind in the whole world.