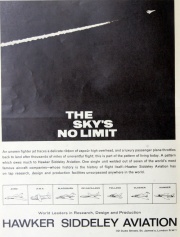 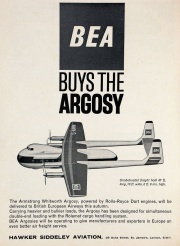 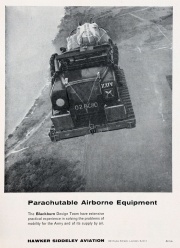 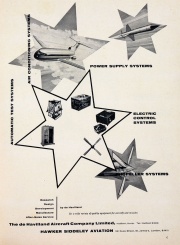 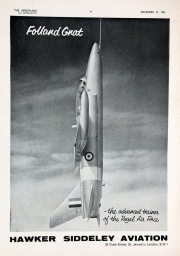 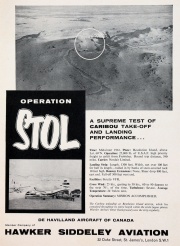 Hawker Siddeley was a group of British manufacturing companies

1935 Hawker Siddeley Aircraft Co was formed as a public company to purchase Armstrong Siddeley Development Co and 50% of the shares in Hawker Aircraft Ltd [1], bringing together the 2 largest UK companies involved in manufacture of aircraft. The companies acquired included the automotive and engine builder Armstrong Siddeley Motors, the aircraft manufacturer Sir W. G. Armstrong Whitworth Aircraft, A. V. Roe and Co (Avro) and Air Training Services. The constituent companies continued to produce their own aircraft designs under their own name as well as sharing manufacturing throughout the group. Sir Thomas Sopwith was chairman of the new company.

WW2 Hawker Siddeley was one of the United Kingdom's most important aviation concerns, producing numerous designs including the famous Hawker Hurricane fighter plane that, along with the Supermarine Spitfire, was Britain's front-line defence in the Battle of Britain. During this campaign, Hurricanes outnumbered all other British fighters, combined, in service and were responsible for shooting down 55 percent of all enemy aircraft destroyed.

1958 In the late 1950s the British government had decided that, with the decreasing number of aircraft contracts being offered, it was better to merge the existing companies, of which there were about 15 surviving at this point, into several much larger firms. Out of this decision, came the "order" that all future contracts being offered had to include agreements to merge companies. Hawker Siddeley merged all its aviation interests into one division, Hawker Siddeley Aviation; these companies were Hawker, Avro, Gloster, Armstrong Whitworth and Armstrong Siddeley[5]. The other part of the company was Hawker Siddeley Industrial Division which was formed to hold the industrial assets; this division had 4 main lines of business - electrical, engines, alloys and constructional engineering[6]

1959 the aero engine business, Armstrong Siddeley, was merged with that of the Bristol Aero-Engines to form Bristol Siddeley Engines.

1959 Announcement of joint venture with J. Lyons and Co called Primapax to make, hire and sell vending machines; the machines would be made by Gloster Equipment Co[7]

1960 As part of a general consolidation in the aircraft industry, Hawker Siddeley acquired Blackburn Group and de Havilland Holdings, making this one of the 2 large airframe manufacturing groups in Britain[8]

1961 Mirrlees National was created from the amalgamation of Mirrlees, Bickerton and Day with the National Gas and Oil Engine Co.

1961 Group consisted of 3 major operational units: HS Aviation, HS Industries and A.V. Roe Canada, plus subsidiaries in South Africa and Australia. Annual sales of £324 million, compared with £6 million 25 years earlier when the Group had been formed[11]. Diesel engines were supplied by Petters, Mirrlees and National; electrical equipment by Brush Electric and Fuller as well as supply of Brush locomotives to British Railways.

After the cancellation of the Avro Arrow, the Canadian company began to unravel.

1962 A.V. Roe Canada was dissolved and the remaining assets were transferred to the now defunct Hawker Siddeley Canada. The heavy rail manufacturing business, based in Mississauga and Thunder Bay, Ontario, have been acquired by Bombardier Transportation.

1963 the names of the constituent companies were dropped, with products being re-branded as Hawker Siddeley or "HS". In this period, the company developed the first operational and most successful VTOL jet aircraft, the Harrier family. This aircraft remained in production into the 1990s and remains in service.

1965 Acquired R. A. Lister and Co, so Blackstone's became a subsidiary of Hawker Siddeley.

1974 Mr. T. J. Loveland was appointed to the board of Hawker Siddeley Holdings. He was the managing director of F. W. Brackett and Co, Colchester, Essex.[16]

On 29 April 1977, as a result of the Aircraft and Shipbuilding Industries Act, Hawker Siddeley Aviation (HSA) and Hawker Siddeley Dynamics (HSD) were nationalised and merged with British Aircraft Corporation (BAC) and Scottish Aviation to form British Aerospace (BAe). HSA and HSD accounted for only 25% of the Hawker Siddeley business by this time.

1977 In August, L. Gardner and Sons was acquired by Hawker Siddeley as the result of a cash offer for that company's shares[17].

1980 The non-aviation and foreign interests were retained in a holding company known as Hawker Siddeley Group Plc after 1980. Subsidiary companies included[19]:

The group was rationalised in the 1980s, focusing on railway engineering and signalling, industrial electronics and instrumentation and signalling equipment.

1981 Acquired a majority interest in Carlton Industries, principally for its car battery activities

1985 Hawker Siddeley, which had held one third of the equity, acquired the whole of the electric cable and accessories business of the Aluminium Wire and Cable Co[23]

1985 In order to strengthen the offering in the small diesel market, Petters and Listers were merged as Lister-Petter

1986 The group had major interests in:

Another company which retained the HS name is Hawker Siddeley Power Transformers. Orenda Aerospace, as part of the Magellan Aerospace Corporation, is the only remaining company from the Avro Canada / Hawker Siddeley Canada era, although greatly diminished in size and scope of operations.