Grace's Guide is the leading source of historical information on industry and manufacturing in Britain. This web publication contains 149,702 pages of information and 235,429 images on early companies, their products and the people who designed and built them. 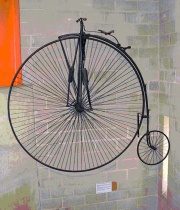 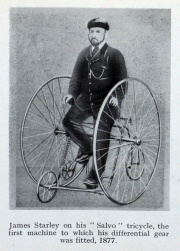 1877. James Starley on his 'Salvo' tricycle. From 'Bartleet's Bicycle Book'. 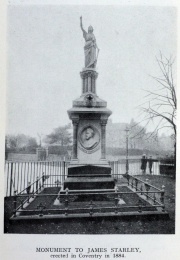 Monument to James Starley erected in 1884 in Coventry. From 'Bartleet's Bicycle Book'. 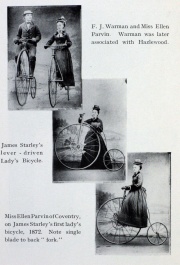 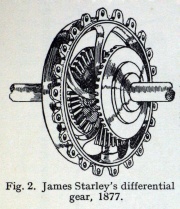 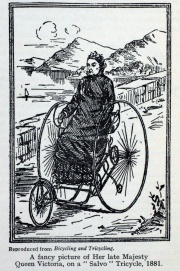 1881. Queen Victoria on a Salve Tricycle. From 'Bartleet's Bicycle Book'.

James Starley (Born April 21, 1830[1] or 1831[2], died June 17, 1881) was an English inventor and "Father of the Bicycle Industry." Note: Baptised 13 Jun 1830 at Aldboourne Born at Albourne, Sussex, he ran away from home as a teenager to Lewisham. With the industrial revolution in full swing the quiet farm life was not for him and his head seems to have been bursting with mechanical ideas.

Initially, he worked as a gardener but soon gained a reputation for mending clocks and devising useful gadgets. Later he settled in Coventry where he became one of the most innovative and successful builders of bicycles and tricycles.

For some years Starley was employed as a gardener by John Penn (proprietor of a large machine works at Greenwich). Penn had purchased a then rare and expensive sewing machine for his wife, which soon broke down. James fixed the problem and, what is more, could see various improvements to the mechanism. Penn knew Josiah Turner, one of the partners of the suppliers of the machine, and in due course Starley left Penn's employment and was taken on at the London factory.

1859 September. Starley started work for Newton, Wilson and Co, of Holborn, London, sewing machine suppliers. While in their employ he made some alterations in a double chain-stitch machine, which were much appreciated. This led him to try his hand at improving these machines and he soon made himself complete master of their mechanism.

Early in 1861, he produced the "European" sewing machine, designed to stitch round the edges of cuffs or the bottoms of trouser legs after they were made up. This machine was made at home in the evenings. Josiah Turner took great interest in Starley's work and often visited him at home.

1861 Patent. '1045. And to Silas Covell Salisbury, of Essex street, Strand, in the city of Westminster, Gentleman, and James Starley, of Lewisham, in the county of Kent, Mechanic, for the invention of "an improved combination sewing machine."'[5]

May 14th, 1861, Starley left Newton, Wilson and Co, and with Josiah Turner and Silas Covell Salisbury, an American, went to Coventry to embark in the sewing machine trade. Salisbury and Starley patented a sewing machine. They rented part of the premises of a Mr. John Newark, on the site later occupied by the Swift works but the business did not prosper.

Local interest in finding work for under-employed watchmakers and those from the ribbon trade led to the formation of the European Sewing Machine Co to make sewing machines, which retained the services of Messrs. Turner and Starley. The works were initially in Little Park Street, later in King Street. Soon a larger factory was needed where the "European", "Godiva", "Express", and "Swiftsure" sewing machines were made. The company became the Coventry Sewing Machine Co, then the Coventry Machinists Co and later Swift of Coventry.

1862 Bankrupt. 'Silas Covell Salisbury, sued and committed as Silas Cyrus Salisbury, of No. 125, Fleet-street, City, Agent for and Patentee of Sewing Machines, jointly with James Starley, and also having lodgings at No. 23, Newland street, Kensington, both in Middlesex, previously of King street, Coventry, in the county of Warwick, Agent and Patentee as aforesaid, previously of No. 32. Essex-street, Strand, Middlesex, Agent and Patentee as aforesaid, having been adjudged bankrupt under a Petition for adjudication of Bankruptcy[6]

About 1865 Starley constructed a four-wheeled velocipede with suspension wheels.

1868 Patent. '1678. To James Starley, of the Coventry Sewing Machine Company, Coventry, in the county of Warwick, for the invention of "improvements in sewing machinery."'[7]

1868-9, Rowley B. Turner, nephew of Josiah Turner (who had become the manager of the company), came over from Paris with an iron-tyred wooden "bone-shaker". The company agreed to make similar machines for Turner to sell in France, and altered their articles of association to permit this.

Starley immediately began to improve the French machine, first with a step to aid mounting, which led to the name of the Coventry machine. He reduced the size of the rear wheel and increased the height of the front wheel, producing the "ordinary".

August, 1870, Starley patented his 'Ribbon' wheel. This was at first spoked with narrow brass ribbons, which afterwards gave way to flat steel, and then to wire spokes. Two spokes were made of each piece of wire, the ends being secured at the hub flanges and passed through an eye on the V rim; the wheel was tensioned by a cross-bar fixed to the hub spindle, from the ends of which short adjustable rods ran to the rim.

1870 Patent. '1430. To James Starley, of the Coventry Machinists' Company Limited, Coventry, in the county of Warwick, for the invention of "an improvement in sewing machines."'[8]

Soon after this, Starley left the company and, in conjunction with William Hillman, started on his own account in St. John's Street, Coventry.

1870 Their Ariel was all-metal machine with modern-style wire-spoked wheels which they patented in 1870.

They were then joined in business by William Borthwick Smith in Smith, Starley and Co at St. Agnes Lane, Hales Street, from where they later moved to Ariel Works, Spon Street.

1872 The partnership of Smith, Starley and Co with William Hillman was dissolved [10]when Hillman left. Starley continued to make the "Europa" sewing machine and the "Ariel" bicycle.

1874, Starley patented the tangent wheel, i.e one with tangent spokes (patent No. 3959)[11]., where the spokes crossed each other as against what was the ‘norm’ at the time, the familiar radial method of assembling a wheel. Rival cycle makers were anti this invention and reluctant to adopt this new method of lacing the wheel, suggesting that it could not be possibly stronger than the radial spoke method, some were convinced that the cross spoke method would make the wheel rim buckle, thus causing accidents. Media at the time added to the controversy by publishing articles describing the different wheel building methods as the ‘Battle of the Wheel’.

Starley declined to be drawn into the controversy and set about silencing his critics once and for all by designing and making a Giant Ordinary (Penny-Farthing), he did in fact make two identical machines. Today one is on display at the National Motor Museum, Beaulieu and the other went to the USA to be demonstrated at the Philadelphia Cycle Show. This machine has not survived. [12]

Further variants on the bicycle and tricycle were developed including lever-driven cycle, and chain-driven tricycles were also devised for ladies and for two rider; the Ariel was followed by the "Tangent" bicycle[13].

1876 Developed one of the early tricycles: the "Coventry Lever Tricycle", patent No. 4478/1876, as depicted on the Starley Memorial in Coventry.

1877 Starley invented the (open) differential for the tandem tricycle, later to be used in cars. This was incorporated in the "Salvo" tricycle.

Starley's sons continued manufacturing cycles after his death but his nephew John Kemp Starley made more of a mark in the long run. It was John Kemp Starley and Sutton who devised the recognisably modern Rover safety bicycle with 26 inch wheels (still a standard size), chain drive, and a diamond shaped frame (no seat-tube as yet) in 1884, showing it in 1885.

The penny-farthing or ordinary cycle was not a safe machine, with a "header" accident being an ever-present danger. Others had experimented with chain-driven "safety cycles" but the Rover really made its mark to the extent that "Rover" means "bike" in some countries such as Poland.

In due course, motor-driven bicycles became motor-cycles and were followed by motor cars. John Kemp Starley experimented with an electric tricar around 1888 but the petrol-driven Rover 8 h.p. car was released in 1904, two years after his death.