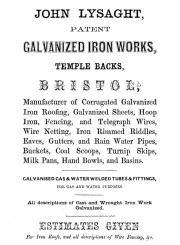 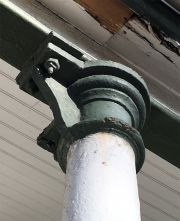 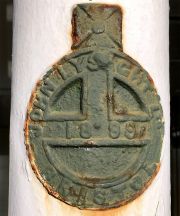 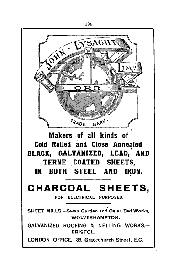 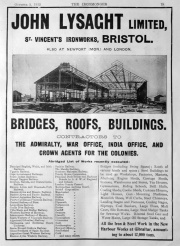 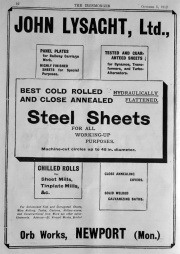 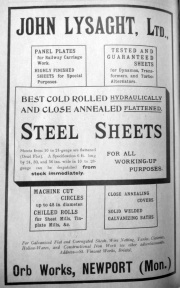 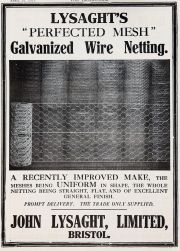 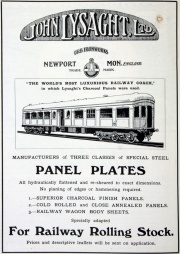 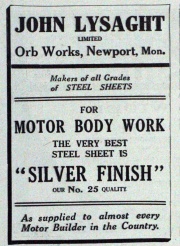 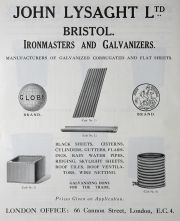 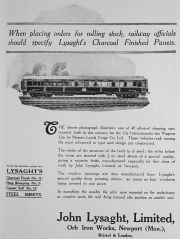 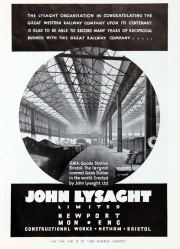 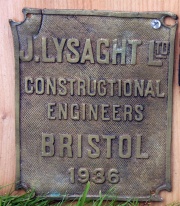 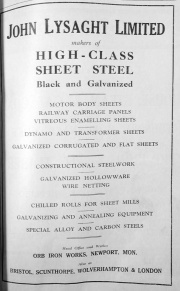 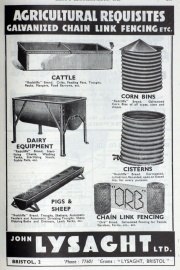 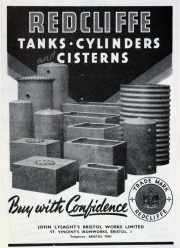 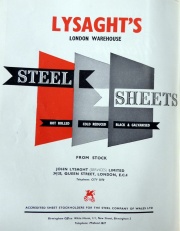 of Orb Iron Works, Newport; and,

1860 Lysaght established the St Vincent's works, also known as the Netham Ironworks, occupying 4 acres of what had been the St Philip's works of Acraman and Morgan. By the 1890s they fully occupied the 13 acre site. The flamboyant office building dates from 1886 [1], and is now home to the head office of renewable energy consultancy GL Garrad Hassan.

1881 John Lysaght's was incorporated as a limited company.

1898 Lysaght's moved their sheet production from Wolverhampton to Orb Works in Newport due to the great increase in the use of steel sheet.[4]

1901 The company was registered on 28 November, to take over the business of a company of the same name, manufacturers of galvanised and black sheet iron and steel, iron and steel buildings, bridges, etc. [5]

1906 Selected Scunthorpe as the site for a new blast furnace plant and rolling mills, because of its abundant ore reserves, from which to produce sheet bars for the company's works at Newport[6].

c.1912 Installed an engine from Galloways at their Orb Works, Newport.

1912 John Lysaght's plant was opened to the north of Scunthorpe away from the main concentrations of iron works and existing quarries[7]. The works consisted of ironstone mines, 96 Semet Solvay coke ovens, with an output capacity of 3,000 tons of coke per week, two blast furnaces of 700 tons per week capacity, four forty-five-ton basic open-hearth steel furnaces, and a 400-ton metal mixer, with steel rolling mills[8].

1913 A third blast furnace was put into operation at Scunthorpe[9].

1919 Lysaghts were still in control of various branches of the business but the Trustees of the late John Lysaght sold the ordinary shares (the great majority of the issued shares) to the chairman Mr Seymour Berry and his friends[12] (D. R. Llewellyn, and Viscountess Rhondda).

1920 Guest Keen and Nettlefolds acquired John Lysaght including the works at Newport ("the largest and best equipped in the UK for manufacture of black and galvanised sheet"), large constructional iron and steel works at Bristol, and five blast furnaces and an up-to-date steel works and adjoining ironstone reserves at Scunthorpe. This purchase also included the whole of the ordinary shares of Joseph Sankey and Sons. Mr Seymour Berry, chairman of John Lysaght, and another director would join the board of GKN; 2 GKN directors would join the board of John Lysaght [15].

1921 GKN had acquired most of the preference shares in John Lysaght as well as 99% of the Ordinary shares [16].

1922 A fifth furnace of 1,200 tons per week capacity was put into blast at Scunthorpe. The steel plant could produce up to 5,000 tons of finished steel per week much of which went to the plate mills of South Wales [17].

1922 Installed an engine from Galloways at their Orb Works, Newport.

1929 The galvanizing works was transferred from Bristol to Newport; finishing would still be done at Bristol[18].

1942-5 Re-built five locomotives with parts from Peckett and Sons.

1947 John Lysaght's Bristol Works were formed as a private company

1955 Private sale of John Lysaght's Scunthorpe works by the Holding and Realisation Agency to GKN including the wholly-owned subsidiary Scunthorpe Rod Mill Ltd. [21] [22]

1966 The Lysaght name was still in use by GKN to identify works such as Scunthorpe [23].

1971 John Lysaght (Australia) Pty Ltd was restructured by GKN as a joint venture with B.H.P. so that its development at Westernport could be financed separately from the parent company [24].