Grace's Guide is the leading source of historical information on industry and manufacturing in Britain. This web publication contains 149,755 pages of information and 235,473 images on early companies, their products and the people who designed and built them. 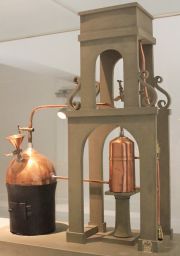 c.1740 model by Desaguliers of Thomas Savery's steam pump, used in demonstrations in lectures by Stephen Demainbray. On display at the London Science Museum

John Theophilus Desaguliers FRS (12 March 1683 – 29 February 1744) was a French-born British natural philosopher (scientist), clergyman, engineer and freemason. He was elected to the Royal Society in 1714 as experimental assistant to Isaac Newton. He had studied at Oxford and later popularized Newtonian theories and their practical applications in public lectures.

He disseminated a great deal of information which would have been of value and a source of inspiration to a wide range of scientists and engineeers. He was something of an inventor, but was not averse to using the ideas of others without giving due credit. He probably effected improvements to others' inventions by applying rigorous scientific principles. Generations of historians have not been slow to point out biased and misleading claims made by Desaguliers.

L. T. C. Rolt described him as belonging to 'that scientific school which refused to credit that a practical man without scientific training could achieve anything except by chance and good luck.'[1]

Between 1717 and 1718 Desaguliers designed a number of steam pumps of the type invented and developed by Thomas Savery. He improved it by adopting water injection to condense the steam (as first used on the Newcomen Engine and installing a safety valve (invented by Denis Papin.[2] [3]