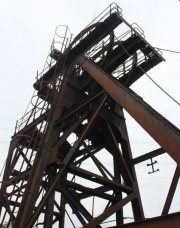 Proprietor Richard Nevill who had expanded his foundry into a large concern, known locally as Nevill's foundry, specializing in the manufacture of heavy machinery, works and marine engines, boilers, and other products.

1880 'OPENING OF THE GILWERN TIN WORKS, CWMTWRCH.
The above works were opened on Wednesday last, amid great rejoicing and enthusiasm. The engine (which was started by Mr Evans, the secretary) is a vertical one, 4 feet stroke, 35 feet[!] diameter, and direct acting, and was supplied by the firm of Mr Nevill, Llanelly, and works most satisfactorily. The erection of the engine has been carried out under the supervision of Mr Richards, foreman in the employ of Mr Nevill......'
South Wales Daily News - Saturday 12 June 1880


1891 Eagle Tin-Plate Works‎ at Neath .... massive compound condensing engines, made by Messrs Richard Nevill and Co., Limited, Wern Iron Works, Llanelly. The large crank shaft and ponderous 40-ton fly wheel immediately arrest attention. The engines have cylinders of 26 and 46 inches diameters respectively, with a stroke of 4 feet. They are arranged to work at a steam pressure of 100lbs on the square inch, while the distribution of steam is automatically controlled by the governor. The ease with which the engines started testify to the excellence of the workmanship and the appropriateness of the design, while the enconiums of the management, "very satisfactory," seem in every way well merited.'
South Wales Daily News, 26 October 1891