Grace's Guide is the leading source of historical information on industry and manufacturing in Britain. This web publication contains 149,687 pages of information and 235,430 images on early companies, their products and the people who designed and built them. 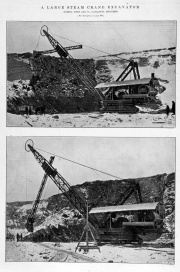 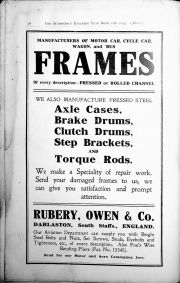 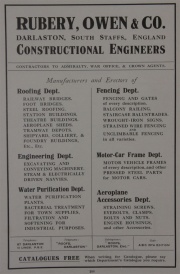 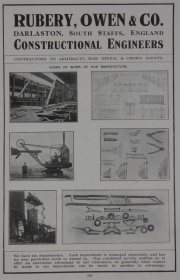 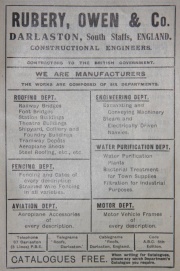 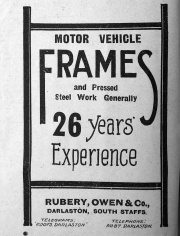 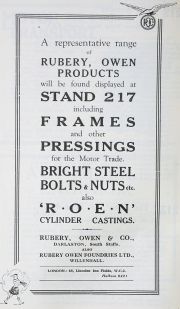 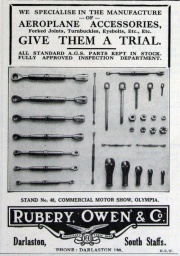 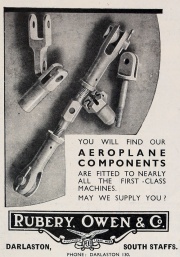 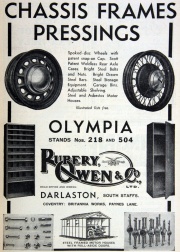 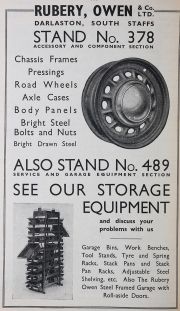 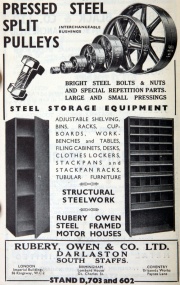 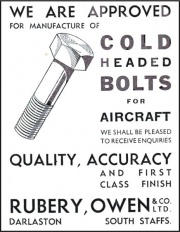 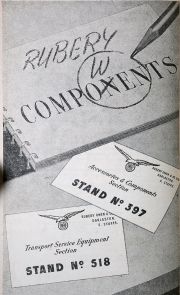 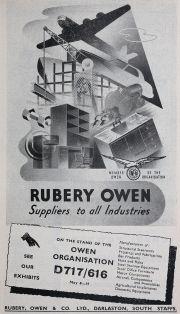 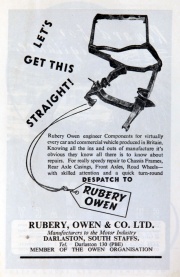 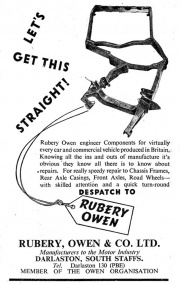 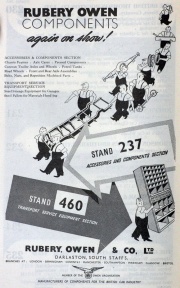 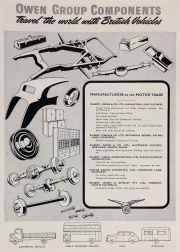 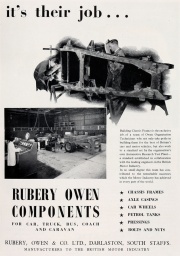 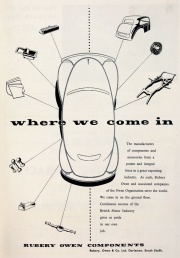 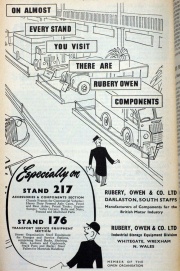 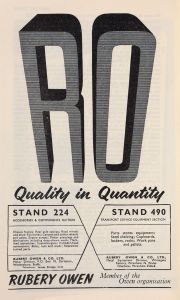 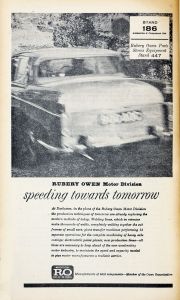 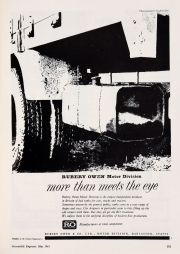 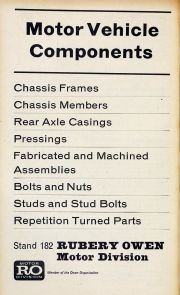 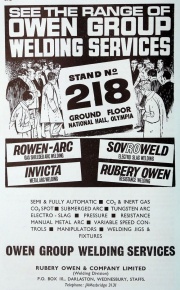 1884 Company founded by John Rubery and his two brothers, as an ironworks manufacturing gates and fences - see Rubery and Co

1893 The Rubery brothers were joined by an engineer Alfred Owen

1903 The company name of Rubery Owen was established.

1910 "NOTICE is hereby given, that the Partnership heretofore subsisting between us, the undersigned, John Tunner Rubery and Alfred Ernest Owen, carrying on business as Manufacturers of Bridges, Roofing, Motor Frames, Fencing, and General Iron and Steel Work, at Darlaston, in the county of Stafford, under the style or firm of 'RUBERY, OWEN AND CO.,' has been dissolved, by mutual consent, as and from the 30th day of June, 1910. All debts due to and owing by the said late firm will be received and paid by the said Alfred Ernest Owen, who will continue to carry on business at the late firm's premises at Darlaston aforesaid, on his own account, under the style of 'Rubery, Owen and Co.' "[2]

1910 Made a very large steam excavator (face shovel), designed by A R Grossmith, for J. B. Forder and Son's Pillange Brickworks [3]

By 1912 the company had expanded into Aviation Engineering, Motor Frames and Roofing, in addition to fencing manufacture.

The company expanded still further during the 1920s and 1930s, to include the production of metal airframes, metal storage equipment, steel pulleys and armour plate. They also acquired a Warrington hydraulic company which became Rubery Owen Conveyancer.

1929 Alfred Ernest Owen, proprietor of Rubery, Owen and Co, died[8]. Rubery Owen was a middle-sized engineering firm with a turnover of some £580,000 per annum and a workforce of approximately 1750. The company had become a successful producer of components for the motor and aviation industries and of structural steel for the building trade.

Owen's sons, Alfred and Ernest took charge of the business.

1934 Alfred and Ernest became joint managing directors of this private business. Their sister, Jean, owned the other third of the business.

WWII Rubery Owen expanded rapidly, manufacturing a huge range of military, aviation, and naval equipment. The company produced parts for war planes including parts for the De Havilland Mosquito. [11] Between 1936 and 1946, turnover rose by some 950 per cent.

Post-WWII. After the war, they expanded their engineering products to include ploughs for Ferguson Tractors, metal pressings, fasteners, motor vehicle components and structural steel components for the building industry.

1946 Messier Aircraft Equipment Ltd, a member of the Rubery-Owen group of companies, designed and manufactured hydraulic and electro-hydraulic equipment for aircraft and industrial applications, including the Conveyancer forklift truck[12]. This has been claimed to be the UK's first forklift truck. Later became Electro-Hydraulics.

1956 The company was restructured into seven divisions:

1963 Amongst its various products, the group offered Drott mobile tractor cranes and self-propelled straddle lifting systems[17]. There were more than 50 companies in the Group including:

1964 Displayed the Rowen dishwasher at the Hanover Fair[20]

1966 Would construct hydraulic excavators for Warner and Swasey of Cleveland, USA, in the Wednesbury factory[24]

1969 The structural fabrications department at Darlaston was closed as part of a group-wide reorganization which included central financial control[26]. Sir Alfred Owen had a stroke; his 2 sons took over the running of the business - David handled Group business; John ran Darlaston which accounted for 40 percent of the company.

1971 14,200 employees. After substantial reorganisation, the group's profits had improved but were still low[28]

1972 Sale of subsidiary companies as part of a plan to concentrate on manufacturing and engineering activities - those sold included Charles Clark and Son, the British Leyland distributor, and the merchanting business Rogers and Jackson[29]

By 1973 20 companies had been sold to raise cash whilst concentrating on motor components and materials handling. Darlaston was split into [30] into 2 companies: Rubery Owen Motor and Rubery Owen Contracts[31]. Acquired the 40 percent of Conveyancer not owned by Rubery Owen[32]

1974 January: Rubery Owen established a new company Rubery Owen Conveyancer[33]. The name Electro-Hydraulics seems to have been discontinued about this time.

1974 Flaskless foundry moulding machine produced up to 240 moulds an hour with cores. 'Larkinmatic-3 was a machine without a moulding box. It conformed to coventional foundry practice by pouring moulds horizontally. [34]

1974 Rubery Owen Conveyancer introduced a new computer service that could produce a plan showing the optimum use of warehouse space by calculating the number of pallets to be stacked, height and number.[35]

1970s Motor car assemblies and components made at Darlaston