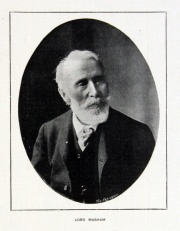 He was born in Calverley Old Hall, near Bradford, the son of Ellis Cunliffe Lister (1774 - 1853), who was the first Member of Parliament elected for Bradford after the Reform Act of 1832 and Mary (née Kay} Lister.

In 1854 he married Anne Dearden, daughter of John Dearden; they had five daughters. He started his working life working for a Liverpool firm of merchants.

Samuel Lister went on to play a key role in the development of Bradford's wool industry during the nineteenth century Industrial Revolution. The textile industry transformed Bradford from a small rural town into a rich and famous city. As well as being a successful mill owner he occasionally diverged to other subjects, such as an air brake for railways. He was fond of outdoor sports, especially coursing and shooting, and was a keen patron of the fine arts.

In 1838 he and his elder brother John started as worsted spinners and manufacturers in a new mill which their father built for them at Manningham. Lister's Mill (otherwise known as Manningham Mills), and its owner, were particularly well known in the district. The business eventually made Lister one of Bradford's most famous fathers, a multi-millionaire and the provider of thousands of jobs in the city. Lister's Mill changed the identity of the region, and its economy. Lister himself came to epitomise Victorian enterprise.

Lister invented the Lister nip comb which separated and straightened raw wool, which has to be done before it can be spun into worsted yarn, and in the nineteenth century it was a hot, dirty and tiring job. By inventing the nip comb, Lister revolutionised the industry.

Around 1855 he began work to find a way of utilising the fibre contained in silk waste. The task occupied his time for many years and brought him to the verge of bankruptcy, but at last he succeeded in perfecting silk-combing appliances which enabled him to make good quality yarn at a low cost.

Another important invention in connection with silk manufacture was his velvet loom for piled fabrics which made him very rich. He had his portrait painted with a model of one of his inventions. However, the business was seriously affected by the prohibitory duties imposed by the United States, making him an early critic of the British policy of free trade.

In 1887 he was appointed High Sheriff of Yorkshire

In 1891 he was made a peer and he took his title from the little Yorkshire town of Masham, close to which is Swinton Park, purchased by him in 1888.

He died at Swinton Park on 2 February 1906, and was succeeded by his son, Samuel Cunliffe Lister, 2nd Baron Masham

One of the most remarkable men of a century noteworthy for the number of great men it produced has passed away in the person of Lord Masham, better known, perhaps to the world in general by his original name of Samuel Cunliffe Lister. He was the fourth son of the late Mr. Ellis Cunliffe Lister, and was born on New Year's Day, 1815 having therefore, at the time of his death just entered on his ninety-second year. Some weeks ago he contracted a severe chill, following to some accounts, on an attack of influenza which seized him, it is said on his birthday. This brought on paralysis of the larynx and necessitated the introduction of a tube to allow of his breathing. He never really recovered though towards the end of January he rallied sufficiently to attend to some pressing business matters..." [more]