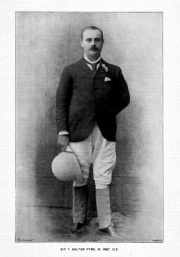 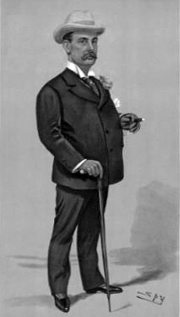 Sir Thomas Salter Pyne (1860-1921) was a British engineer based in Afghanistan.

At the completion of his apprenticeship, he was appointed manager with Willdigg Brothers of Coventry, as manager of a foundry and engineering works.

1883 Went out to India, where he worked for a mercantile firm under Thomas Martin for a few years.

1886 Member of I Mech E, working for Walsh, Lovett and Co of London, Birmingham and Calcutta.

1887 When Martin was appointed Agent by Abdur Rahman Khan, the Amir of Afghanistan, Pyne was sent by Martin to Kabul to be Chief Engineer of Afghanistan. There, as the first European to live in Afghanistan since the Second Anglo-Afghan War of 1879–81, he trained the local people to make guns, swords, ammunition, coins, soap, candles, etc. On behalf of Martin's firm, he built an arsenal, a mint and various factories and workshops, employing in total some 4,000 workers.

1893 he was sent to India by the Amir as a Special Ambassador, and at the conclusion of the negotiations was invested a Companion of the Order of the Star of India (CSI) and knighted by the British government in recognition of his services. He was also a vital contact with the Durand Mission who were defining the borders of Afghanistan.

1898 Living in Kabul; proposed for membership of Inst Civil Engineers

1899 He left the Amir's service because of failing health and was replaced by Thomas Martin's younger brother Frank.