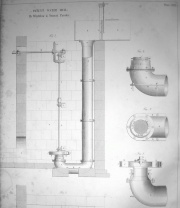 Patented a water mill, on the lines of a 'Barker's Mill'. A simple reaction water turbine. See illustration[1]. Patented in 1839, and sometimes referred to as a 'Scotch Mill'. Influence? One source states that an improved form of Barker's mill was proposed by Mathon de la Cour in 1775, and constructed by Whitelaw in 1839[2]

Some examples had centrufugal governing action which altered the shape of the nozzles on the ends of the rotating arms.

1839 'The improvcd hydraulic machine, which we some time ago noticed as invented by Mr. Whitelaw, Engineer, Glasgow, for the purpose of increasing the power obtained by water, and measuring the quantity used, was yesterday set in motion for the working of a Brahmah [Bramah] press, at the bleachfield of Mr. Stirrat, Nethercraigs. The advantage of this machine over the common water-wheel is first a saving of two or three times the cost of erection ; and second, the obtaining, as is supposed, one third more power by the weight of the water being wholly applied till it escape, with the same effect as when in the water-wheel; it is in a position horizontal with the shaft. So far as this experiment at Nethercraigs can go to establish the use of this new application, it has been far more successful than expected. The machine accomplished all the work it was calculated for in about half the time expected, and with only the one half of the water applied -the sluice having been only half opened.— Glasgow Chronicle.'[4]

An early example was demonstrated in 1840 by Shaws Water Company at the wool spinning mill of Messrs Neil, Fleming and Reid, Greenock. In the demonstration the speed was raised from 62 to 104 rpm, developing above 60 HP at the higher speed. The head was 30 ft and the flow approx 1300 cu ft per min. Efficiency was higher than with any water wheels, and the need for speed-increasing gearing was avoided. Capital cost was much lower.[5]

1841 'WHITELAW AND STIRRAT'S PATENT WATER MILL. It gives us great pleasure to turn a little from the jarring of politics to note the progress of science in our own localities. Having seen accounts from time to time of the Patent Water Mill, invented by Whitelaw of Glasgow, we had the curiosity, a few days ago, of visiting the Culcreuch Cotton Works, Stirlingshire, where one the Patent Water Machines has recently been erected. The Culcreuch works are six stories in height, nearly 200 feet long, and 38 feet wide: they contain above 20,000 mule spindles — several hundred throstle spindles— with other machinery requisite for such works. Hitherto, and for many years, the works were propelled bv two huge water wheels, upwards of thirty feet each in diameter, one five feet in breadth, the other twelve feet in breadth. These wheels made about four revolutions per minute; they were supposed equal to about sixty horse-power, and were fitted up at an expense perhaps of not less than L.2000; whereas the Patent Machine now in their place is only about nine feet in diameter, yet it is equal to ninety-five horsepower, and gives sixty revolutions per minute, and the entire expense of fitting it is only about L.600!! On looking at it revolving at the bottom of the pit in which the supply of water enters, the first impulse is that of astonishment, that such a machine, in the small compass comparatively in which it is placed, possesses such gigantic and unerring power. The machine itself resembles a large-bodied sea snake coiled up and making its angry circumlocutory gyrations in a boiling surf, yet it is attended with the most complete safety to the vast work which it wields, and the persons of those connected with it. We are convinced that this is one of the most remarkable improvements ever made in the application of water as moving power. It has astonished the natives of Culcreuch. It may well astonish scientific men. .....'[6]

Two Whitelaw and Stirrat turbines with a combined output of 90-100 HP were installed at the Lochfineside gunpowder works.[7]

One of these water turbines was supplied to the Chard Canal for working a rope-powered inclined plane. The diameter of the wheel at the centres of the jets was 9.55 ft. Speed 60 - 63 rpm.

1882 Illustrated article on the turbines by James Whitelaw in 'The Engineer'.[9]. He refers to:-
A 200 HP 'wheel' being made for Gwynne and Co to drive reciprocating pumps.
Two 30 HP wheels were supplied to Platt's cotton mills at Hadfield, near Manchester.
Mr Butterfield of Bradford had a similar wheel to Platt's.
W. H. Pemberton of Holt, Norfolk had had a 19 ft head, 3.75 HP example working for about 6 years.
Mr. Helliwell of Kitson Wood Hill, Todmorden had two 6 ft dia wheels working at 420 rpm with a head of 180-200 ft.
Mr Dove of Hurlet-by-Glasgow had a 4 - 5 HP example on his farm, which had worked for more than 12 years.
Other customers included: Fleming, Reid & Co; Mr Houston, dyer; John Poynter, drysalter; Messrs Patten, sugar refiners; Macnab and Clark, engineers; Mr Hollins, Pleasley Works, Pleasley; William Peel, Taliaris Park, Llandillofawr, Carmarthenshire; William Thompson, Hazlwood Hall, Tadscaster; J Macnab, Midton, Paisley. He also mentions tests on one of the wheels at Frocester Court, which gave a peak efficiency of 75.76% at 173.5 rpm. Head 5 ft 3.5",