Grace's Guide is the leading source of historical information on industry and manufacturing in Britain. This web publication contains 149,722 pages of information and 235,473 images on early companies, their products and the people who designed and built them.

1850. Detail of Easton and Amos engine at Taunton Museum (The Museum of Somerset) 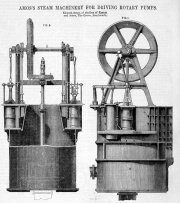 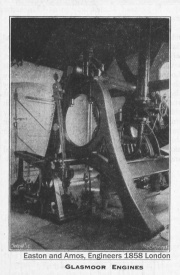 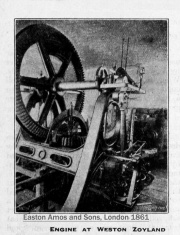 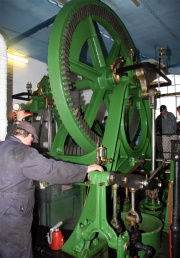 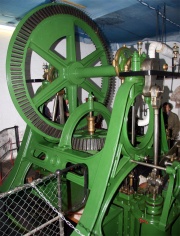 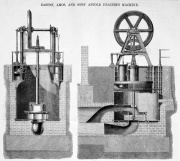 1862 Appold drainage machine. The same type of machine may be seen running at Westonzoyland

of the Grove Works, Southwark. This entry includes Easton, Amos and Sons

1837 The founding partners were Charles Edwards Amos and James Easton

1843 James Beswick leaves the partnership. '...the Partnership heretofore subsisting between us, James Easton, Charles Edwards Amos, and James Beswick, carrying on the business of Plumbers, at the Grove, Great Guilford-street, in the parish of Saint Saviour, in the borough of Southwark is this day dissolved, by mutual consent...'[1]

1849 Mentions as insolvent debtor James Butterworth, of No. 6, Belvidere-road. Lambeth, Surrey, Clerk and Traveller to Messrs. Easton and Amos, of the Grove, Great Guildford-street, Southwark, Surrey, Engineers, and also Clerk of the District Church of All Saint's, Lambeth.[2]

1850 Easton & Amos beam engine at Taunton Museum (The Museum of Somerset), formerly in Pearsall's Silk Mills, Taunton. Numerous photos of various features of this engine are shown in Easton and Amos Beam Engine in Taunton

Late 1850s: Modernisation works at Alnwick Castle: '....The numerous larders and sculleries have been conveniently placed on one level; and hydraulic lifts from the kitchen to the principal floor also combine to save unnecessary labour: these latter are the engineering works of Messrs. Easton & Amos.' From The Builder[6]. The lift's prime mover, which remains in situ, is unusual, having a large horizontal hydraulic cylinder, apparently working at relatively low pressure, whose piston moves a rack engaging with a pinion driving speed-increasing gearing to turn the winding drum.[7]

1858 Beccles, Suffolk: 'Drainage op the Corporation Marshes.— The steam mill erected by Messrs. Easton and Amos, the celebrated engineers, of the Grove, Southwark, having been completed, we give the following account of the machinery, which we apprehend will not prove unacceptable to our readers. The apparatus for raising the water consists of an Appold's pump (similar to the one shown in the Exhibition of 1851), but much improved by Messrs. Easton and Amos. The fan, 2ft. 9in. in diameter, works horizontally in a strong cast-iron cistern. A pair of high-pressure expansive and condensing vertical grasshopper engines of ten-horse power each, are placed and attached to each side of the iron cistern, the fly-wheel, shaft, &c. being at the top and over it. The whole machinery is placed in such a compact manner as to occupy but very small space. The boiler is multitubular with large steam chest; and a stout iron funnel 23ft. high acts as a chimney shaft. The whole building is of red brick with corrugated iron roof, no wood being used except for the doors. A convenient coal-house is formed in that portion of the structure next the boiler. Very great credit is due to the eminent firm who planned and erected the works for the excellent and the efficient manner in which they have performed their contract.' [9]

1861 Drainage machine for the Somerset Rivers Drainage Board (Westonzoyland Station). This is a two-cylinder steam engine driving Appold centrifugal pump preserved in running order at Westonzoyland Pumping Station Museum. In 2016 it received an Engineering Heritage Award from the Institution of Mechanical Engineers.

1862 'Easton, Amos, and Sons have lately completed a 7 ft. Fourneyron turbine for the Duke of Wellington's estate, Strathfieldsaye [Stratfield Saye].[11]

1864 William Anderson joined the company and planned the new works at Erith. The company's business was making pumping machinery of all kinds, centrifugal pumps, cranes, boilers, and paper and sugar machinery.

1865 New works at Erith 'are progressing rapidly towards completion'[15]

1866 James Easton and C. E. Amos retired from the company which became Easton and Anderson

From 1863 to 1869 a 'new engine and pumping machine' were included in advertisements for the sale of the Northern Estate, Wexford, formerly the property of John Edward Redmond M.P., deceased, reclaimed by the Wexford Harbour Embankment Co.[21][22]