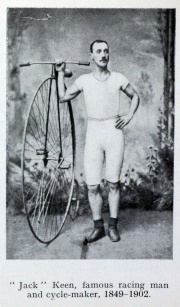 1849 February 25th. Born at Broadway in the county of Worcestershire and lived in Surbiton, Surrey from the age of five. He gained an international reputation both as a professional sports cyclist and a manufacturer of bicycles.

Also known as ‘Happy Jack’, John Keen trained as a carpenter but his passion was the new sport of cycling on high bicycles (penny-farthing) which were newly developed from the velocipede. It has been reported that he began racing as early as 1869 and when a racing track opened in Surbiton he won the first event.

In May 1873 Keen, with James Moore introduced larger wheeled bicycles to France at the championships in Lyon where wheel sizes up to 45 inches had been the norm.

Keen frequently competed against Fred Cooper for the One Mile Professional Championship. An athletic newspaper at the time reported that 12,000 people attended a meeting at Wolverhampton to see the men compete.

In the spring of 1876 John Keen travelled to New York with his bicycle.

By 1878 he was internationally reputed to be the fastest rider in the world, the professional champion of England and his name appeared on advertisements (in 1879) for the Columbia bicycle manufactured in the USA which stated his achievement of 1 mile in 2 minutes and 43 seconds (22 mph).

In 1879 Keen, together with David Stanton and William Cann were invited to race in the United States against inexperienced local opposition. In pursuit of all records from one to twenty miles, Keen achieved 16 miles and 790 yards in one hour. It was said that he sailed to New York to take on John S. Prince in 1883.

In the 1870s Keen set up a business developing and manufacturing bicycles in Surbiton. Kingston Museum has an example of a bicycle bearing a badge "John Keen Surbiton Hill 1872".

A printed notice held in the papers of the Cyclists' Touring Club reassures the public that he is still making his Eclipse bicycles to which there are significant improvements this year (September 1877).

C. F. Caunter wrote that "John Keen, at Surbiton, built machines lighter and higher than had previously been thought possible." He appears to have moved his business to Dalston Junction, then Clapham and latterly returning to Surbiton (Victoria Road). His cycles were known by the brand name ‘Eclipse’.

His business moved to a workshop in Thames Ditton beside The Angel public house which was popular with cyclists using the Portsmouth Road.

It is recorded in the census of 1901 that he lived at Claremont Terrace, Portsmouth Road, Long Ditton.

He died in Finchley on 13th January 1902, of tuberculosis.

First professional cyclist to cover more than twenty miles in an hour (although some claim it was Herbert Liddle Cortis who first broke the record).

In 1872 a meeting took place on the 20th and 21st of May and the highlight of the day was the mile championship in which Wolverhampton rider Shelton beat Surbiton's Jack Keen by ten yards, with a time of 3 minutes 13 seconds.

In August Keen beat Shelton in the record time of 3 minutes 9.5 seconds and by September he had reduced his time to 3 minutes 6 seconds.

In August 1873 Shelton got his revenge when Keen took a tumble and he had an easy win. On the same day he also won the four mile race in a time of 13 minutes 34.75 seconds. Valuable prizes were offered to successful competitors.

In February 1874 Fred Cooper beat James Moore by two yards in the one mile race and won £100, a large sum of money at the time. His time was 3 minutes 9 seconds.

During the winter of 1874 a 50 mile race was arranged between Jack Keen and David Stanton who was considered to be the greatest cyclist in the world. Unfortunately Stanton took a tumble after the 31st mile leaving Keen to win in a record time of 3 hours 9 minutes 19 seconds.